Explore Seven of The Most Beautiful Alpine Lakes in the World

One of the greatest gifts Mother Nature has granted lovers of the outdoors is our planet’s wealth of alpine lakes. Blessed with fascinating colors and scenic mountainous backdrops, the vast majority of these high-altitude jewels come with a ‘must see’ quality not shared by many of their lower-altitude cousins. National Geographic states that there are no fewer than 117 million lakes worldwide. While we certainly don’t envy the poor dude or dudette tasked with counting them all, narrowing them down to the top seven is certainly no cake-walk either. Nonetheless, below, we take you through seven of the most beautiful alpine lakes in the world that you should consider putting on your must-adventure list. And if these chosen seven happen to be outside of your range, fortunately for all of us we have 116 million, nine-hundred and ninety-nine thousand others, each offering their own, unique adventure. 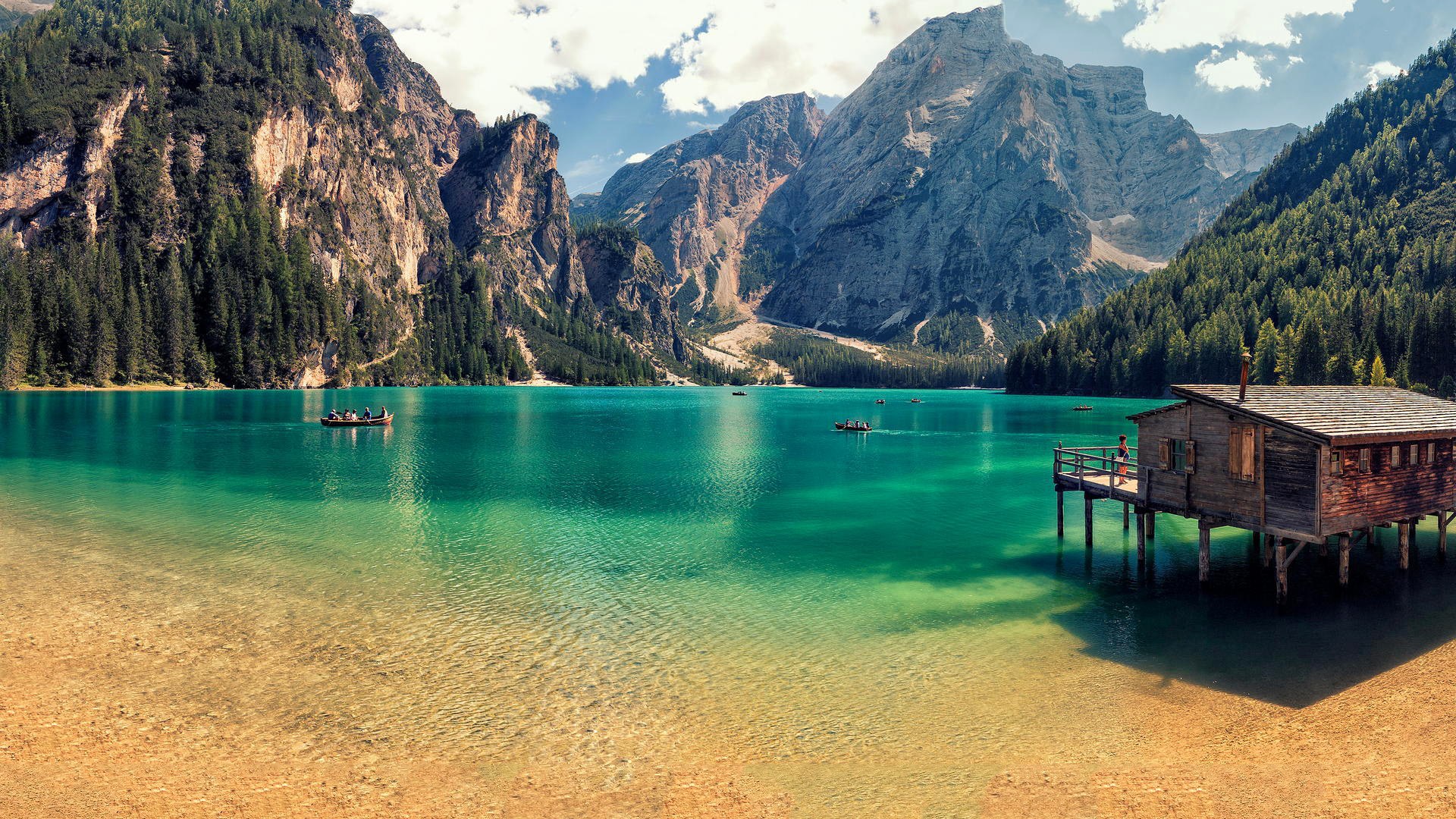 Situated at the start of Italy’s famous long-distance hiking and via ferrata trail, Alta Via #1, this magnificent emerald gem nestled between a collection of giant peaks is almost enough to make you abandon the hike and stay there forever. Visitors to South Tyrol are almost spoiled for choice when it comes to spots of natural beauty but almost always cite Lago di Braies as one of the region’s highlights.

According to legend, the south end of the lake – which is located in the north of the Fanes-Sennes-Braies Natural Park – was known as the gate to the Fanes underworld and could be reached only by boat. For the money, it resembles a gate to paradise, if not paradise itself…! While Italy is loaded with lots of glorious lakes – alpine or otherwise – if you only visit one, be sure to make it this one! 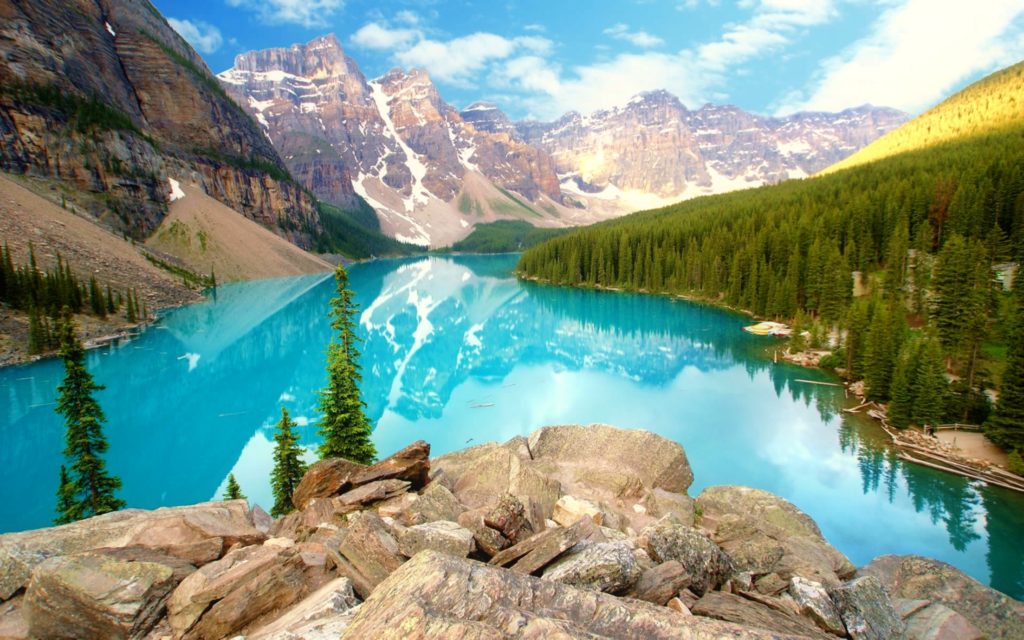 Perhaps the most iconic alpine lake in the world, Moraine Lake has been featured in numerous of films, commercials and TV series over the years, not to mention the thousands of wanderlusty pictures surfing across our Instagram, Facebook newsfeeds. And it’s really not difficult to understand why…

The lake lies in Banff National Park at 6,183 feet (1,885m) in the Valley of the Ten Peaks, with the towering giant’s mountainous reflection illuminating the lake’s sparkling turquoise waters. The unique color is due to the refraction of light from dust particles deposited in the lake from the surrounding mountains and the variations in tone from dawn to dusk add another level of fascination to the lake’s already existing and popularized allure.

A number of hikes surround the lake, with the most accessible being the Rockpile Trail leading to the “Twenty Dollar View”, the exact spot as represented on a former Canadian twenty-dollar bill. 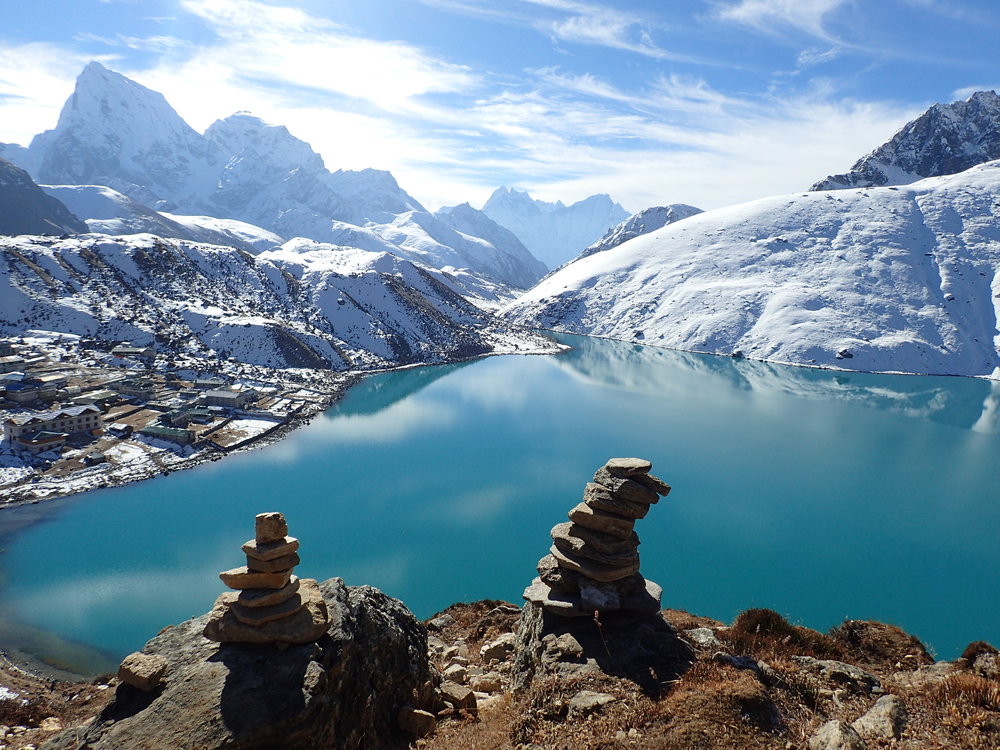 Taking a relatively short but massively worthwhile detour from the popular Everest Base Camp trek will land you in the midst of three of the most eye-poppingly gorgeous alpine lakes this side of paradise.

Just below Gokyo village, the arriving hiker is greeted with the shocking awe-inspiring turquoise lake and beautiful snow-clad landscape. During a two-three-hour hike, you will have the opportunity to take in a number of other magnificent alpine lakes and views of the mighty Cho Oyu, the world’s sixth highest mountain. At 17,575 feet, looking down at the views of the alpine lakes at sunset and/or sunrise are nothing short of amazing. Not to mention, the views out to Everest, Ama, Dablam, Pumori, Nuptse aren’t too shabby either! 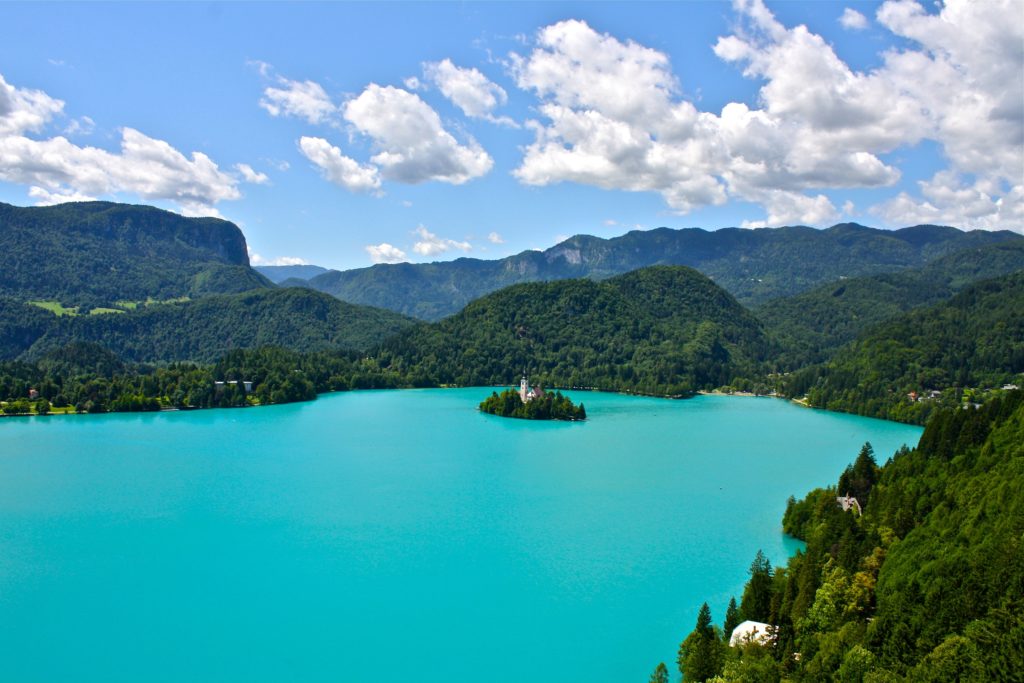 Located in the heart of Slovenia’s stunning Julian Alps, Lake Bled is easily reachable from the capital of Ljubljana in a few hours but better reached – and in some style – on the transalpine railway from Gorizia on the Italian border, which in itself is an experienced to be remembered. As if the lake and the surrounding peaks weren’t enough themselves, a tiny island in the centre of the lake hosts a delectably cute 17th-century church – the three combined, we’re sure you’ll agree, make Lake Bled one of the most picturesque spots in Europe, if not the entire world. 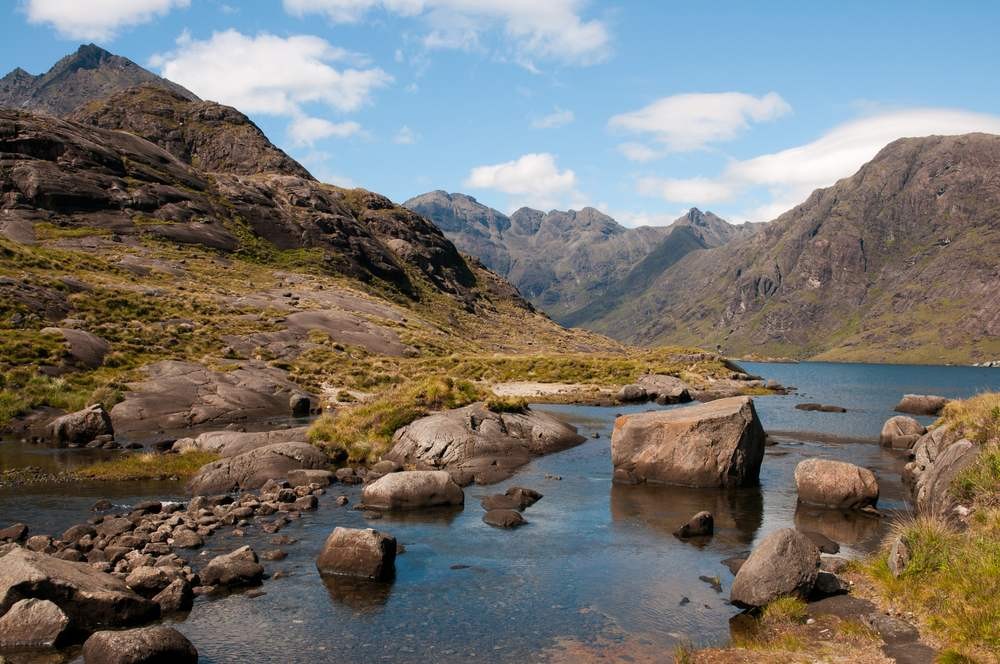 The Isle of Skye on Scotland’s north-west coast offers a taste of everything Scotland has to offer – wilderness, castles, dramatic coastlines and jagged mountains. Oh, and a distillery or two as well, of course! One of the Island’s top-attractions for hikers and mountaineers is the 16-kilometer (9.9 mile) ridge traverse atop the Cuillin (pronunciation: ‘koo-lin’) Mountains on the island’s south-west tip. The traverse takes around 24 hours and requires over 13,000ft of ascent, so don’t set off without your sandwiches! In a long, narrow, glacial cirque carved between the dark spires of the Cuillin, the mysteriously moody Loch Coruisk is backed by the often moodier North Sea, and is sure to be one of the most dramatic bodies of water in the British Isles and possibly the world.

The ‘loch’ (the locals don’t take kindly to ‘lake’!) can be reached by a two-hour hike from Sligachan Bridge else by ferry from Ergol, and is best combined – for those not experienced with ridge excursion – with a hike up over the Bealach Coire na Banachdich pass and down to the world-famous Fairy Pools on the western side of Cuillin, which were just a little bit on the small side for inclusion as a ‘lake’! 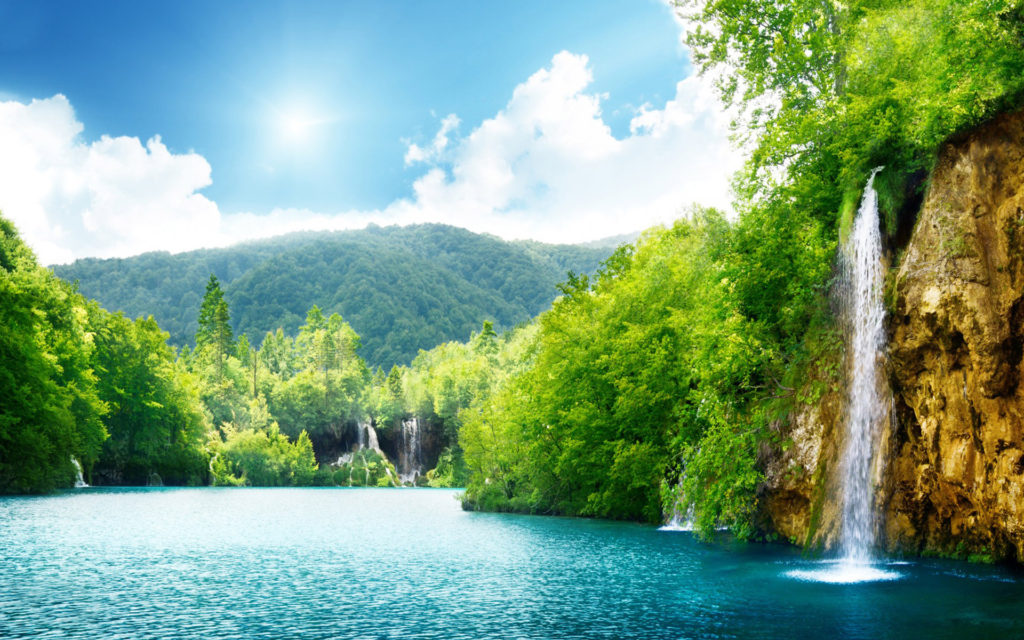 The UNESCO-protected Plitvice Lakes are possibly Croatia’s top attraction, drawing in as many visitors per year as the string of rocky islands strewn along her sun-kissed Adriatic coastline. The Lakes are situated on a dramatic high plateau and over time have carved a lush, high-walled canyon now served by multiple trails wending through, around and above the crystalline, teal waters of the lakes themselves. In Spring, the plant life adds another dimension of beauty that makes the area seem more like a fairy tale creation brought to life by the imagination of some exceptionally inventive and aesthetically inclined set designer than one carved and curated patiently by the hand of nature alone. 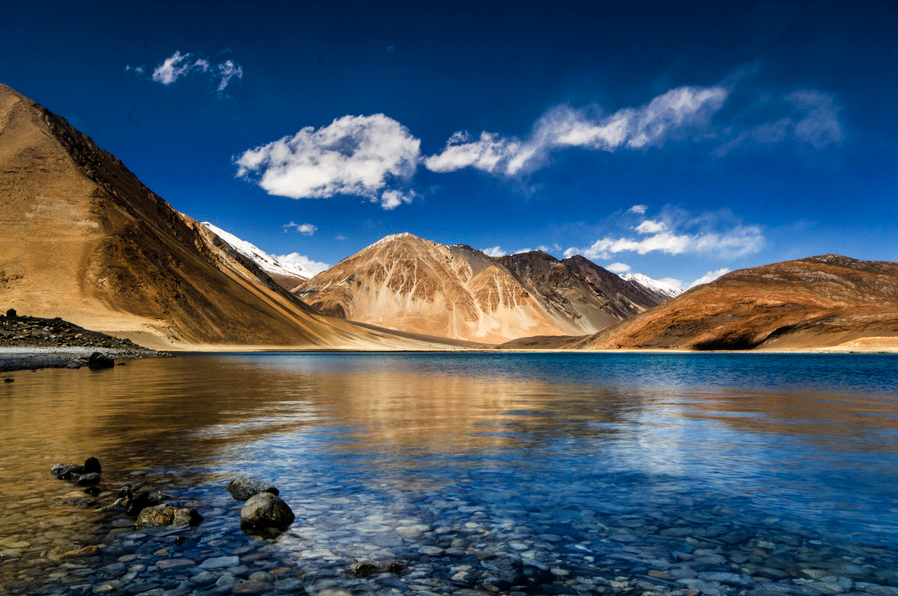 Closed to tourists until the mid-1990s owing to ongoing tensions between China and India, Pangong Tso on the India-Tibet border retains a certain air of mystique which adds nicely to its already outstanding and unique scenery. Luckily, the Indian portion of the lake, 154km south-east of Leh (regional capital of Ladakh) is now open to visitors with a permit and a stomach for the rough, airy road-trip required to get there. At an altitude of 4267m (13,999 feet), you’ll also need to get in a little bit of acclimatization before heading up to this one! The rough journey and the fact that three-quarters of the lake are in Chinese territory – and thus inaccessible – do not detract any from the lake’s appeal, and can in fact add to it, with the Indian portion offering tantalizing views into Tibet in addition to those of the glacier-covered Pangong Range to the south and the Changchenmo Range reflected across the waters to the north.

Explore Seven of The Most Beautiful Alpine Lakes in the World