With so many big-name and not-so-big-name outdoor brands on the market these days, all producing relatively similar goods, choosing where to spend your hard-earned cash can prove to be fairly problematic, especially for the less decisive among us. In terms of quality, value for money, durability and performance, the options are endless. While these factors are all obvious pre-purchase concerns, one additional criteria could simplify the decision-making process and help you make both an ethical and karmically kind choice next time you set out to buy some new gear for the outdoors. That criteria is heart. And it comes with the ‘profit for good’ approach that allows your dollar and purchases to make a real impact on the environment, and surrounding community. Whether it’s planting a tree (or ten), removing a pound of trash for every product sold (Check out United By Blue), the bottom line is we have a choice and can choose what brands and companies we buy from and we choose to stand with the ones making an impact. For a relatively small outdoor brand, nobody is making an impact quite like the Nepalese outdoor brand, Sherpa Adventure Gear. For a small Nepalese company, Sherpa packs a whole lot of love into its remarkable business ethos. 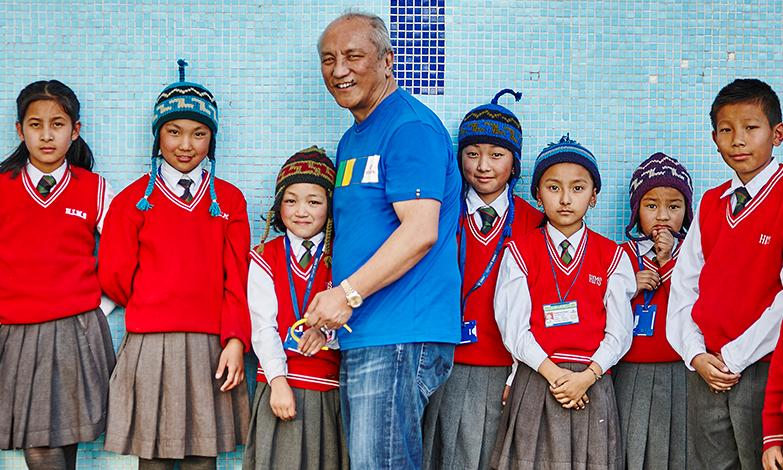 When Tashi Sherpa founded Sherpa Adventure Gear back in 2003, his objective was to create a brand that paid tribute to his childhood heroes – Sherpa climbers – while helping to provide for the numerous Sherpa communities across Nepal living in poverty and racked by the effects of natural disaster. He also aimed to produce garments inspired by the Himalayas, proud to bear the label ‘Made in Nepal’ and a business, in his own words, ‘focused on providing social and economic stability to the people of Nepal through steady employment, quality working conditions and educational opportunities for future generations’. Many companies make such bold claims for their products, but not quite so many live up to them. Sherpa, however, has done just that.

Since its founding in 2003, Sherpa has taken great steps towards achieving Tashi’s aims, directly helping thousands of Nepalese people by providing jobs, funding education programs for underprivileged students, assisting with disaster relief and supporting Nepalese orphanages, all while running a very successful and competitive business. For a fairly small-scale company battling the giants of the west (whose objectives are often altogether less conscientious), Sherpa has more than managed to hold its own while commendably maintaining its original objectives and a strong sense of its Himalayan identity.

Sherpa’s most immediate and greatest success to date has been in bringing lasting change and improvement to the lives of the Nepalese people by offering them meaningful, long-term employment and income.

Over 85% of Sherpa’s products are created, developed and manufactured in Nepal and as such they are responsible for the employment of thousands of people in the country either directly, through their own manufacturing sites and workshops, or indirectly through their suppliers. At present, there are over 500 people working in Sherpa’s Nepalese production centers and during the busy season they employ over 1,000 local women to hand-knit their caps and sweaters alone. At the same time as giving full or part-time employment to so many who would otherwise be living below the poverty line, Sherpa has implemented training programs across Nepal with a view to expanding their workforce as the company grows.
Sherpa’s care for the Sherpa people doesn’t end there, either…

Perhaps the most admirable and impressive aspect of Sherpa’s ‘what goes around comes around’ mentality is the focus they have placed on educational assistance to children in poverty-stricken areas. They currently support full education scholarships for underprivileged Sherpa children through the Paldorje Education Fund, into which they donate 25 cents for every Sherpa garment sold. Between May 1st and December 31st 2016, Sherpa added $29,482 to their scholarship fund, which was enough to support 11 students with full funding for accommodation, tuition, extra-curricular activities and meals for the following year. Sherpa currently has 26 students enrolled in local schools and on full-time scholarships, thanks to the Sherpa scholarship fund which financed 118 school days per student per year and is providing a total of 6,738 meals!
To boost the Paldorje Education fund, Sherpa have also hosted events such as the 2014 lecture series which features talks from Sherpa-sponsored athletes such as Neil Gresham, Ed Hamer and Kenton Cool. Events like these seek to finance schooling and accommodation for Sherpa children whose parents have been killed or seriously injured as a result of their work in the mountains.
Read More

In addition to scholarship funding, Sherpa also works alongside several other organizations in Nepal and overseas to raise funds, build schools, support orphanages and provide safer living conditions for young people across Nepal. The long-term goal is to build a school of their own, a dream that will be realized when they reach their target of 600,000 products sold.

Sherpa’s production centers are partnered with a duo of Nepalese organizations that seek to improve the lives of female workers in Nepal by providing them with training and support. The first of these organizations, Women For Women in Nepal, is the first organization in Nepal working to strengthen the rights of women by advocating and lobbying for the cause of female workers as well as conducting training programs and helping them find employment. The second organization, the International Organization for Migration (IOM), provides psyco-social counselling, vocational training and enterprise development support to rescued survivors and potential victims of human trafficking.

If you’re going to buy products, you might as well buy products from the companies who are committed to ‘profit for good.’

Next time you’re out shopping for outdoor gear and apparel, be sure to check that amongst the various specs listed, the product you plan on buying has a healthy dosage of heart behind the label…if it doesn’t, remember Sherpa Adventure Gear, the little, up-and-coming brand from Nepal that has it in spades!