Grizzly Bear attacks are extremely rare and it’s highly unlikely you will ever be charged by one much less catch it on camera. But, that’s exactly what happened to two mountain bikers riding on a trail at the Jasper National Park in Alberta, Canada. The Grizzly in the below video had a cub with her and was more than likely protecting her cub when she saw the first mountain biker coming down the trail. The mountain biker stops to wait on his cousin and that’s when he hears low growling to look up and see the Grizzly charging him. He quickly jumps on his mountain biked descending 50 feet down the mountain nearing the edge of a cliff. Fortunately for him, the bear is distracted by the second mountain biker and decides to take a detour of his own allowing the two to escape down the trail. 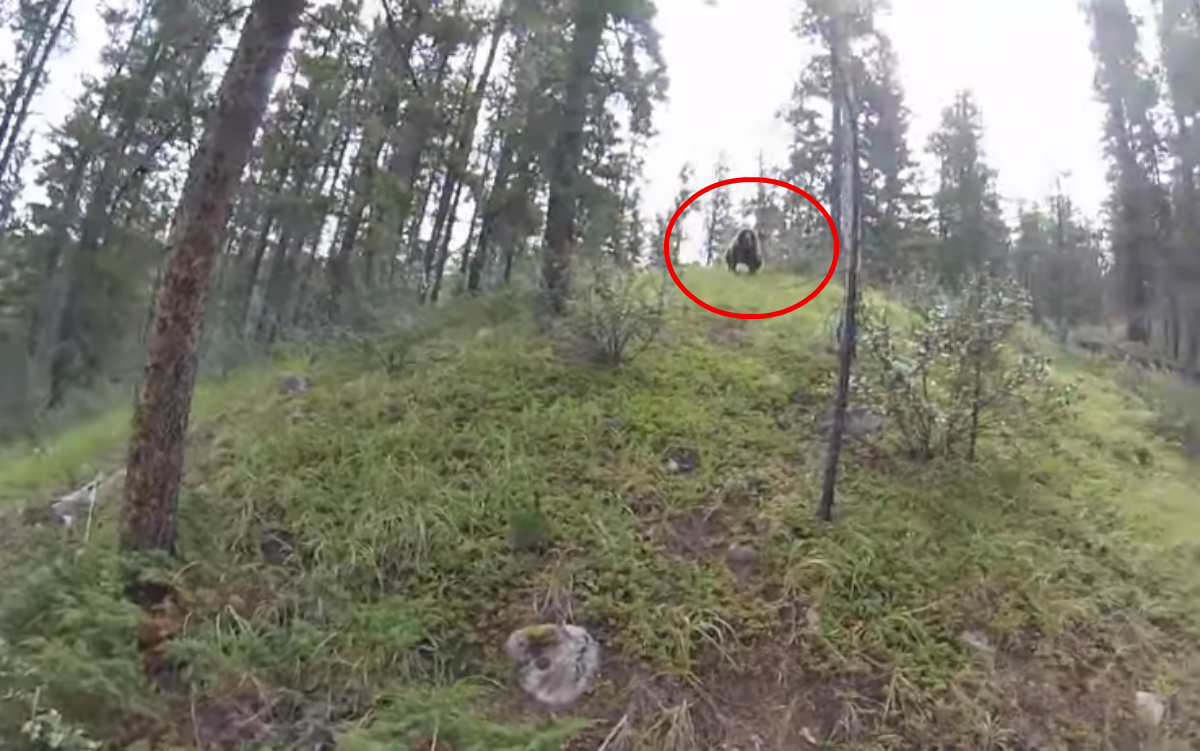 For the most part, Grizzlies would prefer to avoid humans at all times. A large majority of attacks actually result from bears that are held in captivity by animal trainers, zoos, or even kept as pets. And then there are the surprising yet seemingly common scenarios where people either fall and/or willingly enter a bear’s cage and gets mauled. Outside of these, bear attacks can and do happen in the outdoors and when they do, they will often be for one of three reasons. Bears are very territorial. Grizzlies do not play well with others and prefer to fly solo.

They aren’t interested in seeing you roll up in your bike on their home turf while their hunting or trying to take a nap. Secondly, bears are very protective of their cubs. A large majority of attacks including the charge in the below video, stem from a momma bear trying to simply take care of her cub(s). Lastly and the most obvious is Grizzlies are wild animals. And in their environment, they are at the top of their food chain.

from the web
In the wild, this hierarchy and understanding of your role is extremely important and often the key to survival. The feeding relationship in an ecosystem leads to the inherent predatory tendency for a Grizzly potentially seeing you as part of the food chain. The wilderness is just well, the wilderness and it’s best to understand and respect mother nature while enjoying it at the same time. So below, let’s take a look at a couple ‘heads up’ tips any outdoorsman or woman should embrace when encountering a grizzly.
Watch Video
There are plenty of precautions to keep in mind if you are or plan on spending a lot of time in the outdoors. And if followed can lead to very rewarding experiences. When hiking or traveling through bear country, you have to face and be prepared with the real possibility of encountering a Grizzly bear. Mother nature is not always gentle and there are many things you should look out and be prepared for when wandering the outdoors.

If you like hiking through bear country, then be prepared to see a bear. This sounds so common sense it’s ridiculous, but the number one rule of the outdoors is to know and understand your surroundings. When in the wilderness, this knowledge and preparation can often be the difference between life and death. It’s also important to demystify any misconceptions. First,Grizzly bears are not experts at climbing, but are capable of climbing short distances. That said, Grizzlies can climb, but let’s face it – they’re lazy and would prefer not too. If you’re only opportunity is to scale a tree to get away, do it. Just make sure you scale it fast and are prepared for the waiting game. Getting up high in a tree will likely prevent the bear from climbing after you but in turn, you’re likely going to have a squatter for the next few hours.

If the bear has not yet detected you, then it’s best to keep it that way. Unless you have a firearm, do not heed the advice of most who believe that yelling will send the bear running away in fear. The best you could do is to move away slowly, quietly and try to put as much space between you and the grizzly as possible. Leave a clear path towards the bear and, before continuing your journey, back off and give the bear the necessary time to leave the area. Consider making a wide detour around the area while being silent. Bears are loners and if you do not invade their personal space and practice best practices when camping, you should be fine.

If The Bear Sees You From A Distance

The best way to act in this kind of situation is to let the bear identify you, however, it is important to let him know that you are no threat. By nature, bears are not aggressive animals. They will however act when they feel threatened. Speak with a calm and low tone so that it recognizes that you are a human. Bears have worse eyesight than humans often relying on their superior hearing and sense of smell. In most cases, when a bear identifies a human nearby, they will leave the ground and be on their way.

If The Animal Is Showing Aggression

If you follow the guidelines above, then you will have a bit of distance between you and the animal, so you will have more time to react and assess the situation.

Evaluate the situation and see if you are dealing with a grizzly bear or a black bear. Are there cubs around? Are there any trees around and is there time to climb them or retreat slowly?

Make sure that you don’t panic and start running. There is no way that you can outrun a bear outdoors, not even if you’re a track star. Bears can catch anyone no matter what the terrain is, downhill or uphill. Some people say that it is possible to outrun a bear if you run downhill, but this is not true, so don’t try doing it. If the bear sees you running, he will just follow his instinct and you will increase your chances of being chased.

If the animal has already charged you, don’t panic. Bears aren’t that much into chasing humans and they will often bluff with their charge to scare someone away. They are scared as well and this is a defense mechanism animals use to give its “enemies” time to back off.

If You Get Attacked

If there is no way to avoid the actual attack, then you must fight back with everything you’ve got. Make sure that you always have pepper spray with you when hiking through bear country. Get a pepper spray for your backpack and for manual use also. You can use pepper spray at close range only with a maximum reach of 15 ft. Be careful when using it, as the wind can shorten its reach and even backfire the spray into your face. In the video below, the mountain biker had left his bear spray. His cousin did have his, but was fortunate to not have to use it.

You can try using it even while the bear is still out of range to scare it away with the scent. If the bear approaches, aim for its eyes and use it. In case this doesn’t work, try lying on your back and pretending to be dead. This is something that has worked for many people in the past. Furthermore, your backpack will protect you from injuries and the bear can also hit the pepper spray in your backpack which will scare him away.

Because of the leaked video of the attack in Jasper, grizzly bears have gotten a bad rep. Bears aren’t really that aggressive and now that you have learned a few things, you know how you can avoid becoming a victim yourself. This mountain biker below surely took a few of his own chances and fortunately made it out alive. But is not a good example of what you should do when encountering a grizzly.