Driver Of Submerged Tractor Refuses To Give Up

Rural Russia is an interesting place. The scenery is beautiful, the roads are crap, and the snow is deep. To conquer their massive patch of planet, the Soviets had to create an armada of monster machines, like the Kirovets K-700. This articulating 4×4 tractor is unbelievably capable. The K700 driver in the below video grossly under-estimated the depth of a frigged Russian river. So when the driver managed to completely submerge one in a Russian river, this beast clawed its way back to dry land expelling lots of black smoke and Soviet-era horsepower. And the kicker is, this Kirovet K-700 came out of the river…pulling a goose-neck trailer! 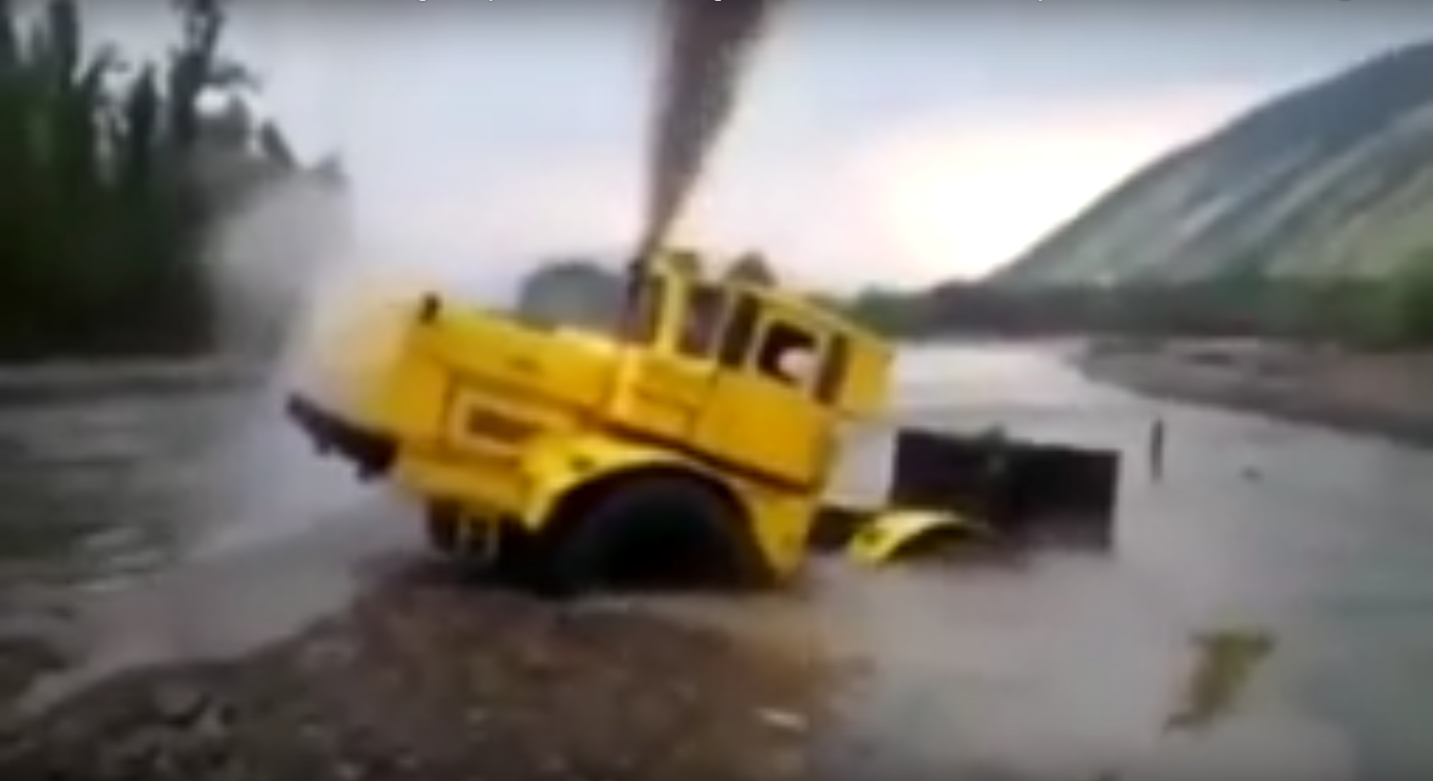 The biggest cause of mechanical mayhem is overly confident drivers. You can’t just fling your machine into a situation that it wasn’t designed to handle, and then expect it to get you out of trouble unscathed. Many of the drivers in YouTube fail videos deserve their fate, and the tow truck drivers who rescue them deserve the money they make. But since calling for help isn’t an option when you’re 900 miles from nowhere, you’ve got to find some determination. And if you happen to screw up in Russia, you’ll probably want to find some vodka too…


The articulating tractor in this video is a Kirovets K-700, and it first rumbled across the Siberian landscape back in 1962. With the Cold War war underway, Soviet heavy vehicle manufacturers had to get creative in order to meet their customer’s needs. To that end, the K-700 was designed to provide farmers with a seriously-heavy-duty tractor that could pull everything from a plough, to a small skyscraper. It had a hydraulic articulating body, with a rear drive axle that could be quickly disconnected for maximum maneuverability. And power came from a selection of V8 and V12 turbo diesel engines, which offered between 817 lb-ft and 1,338 pound-feet of map-altering torque.

Judging by the grille, the Kirovets K700 in the video looks to be a second-generation model made after 1975. This 26,000 lb behemoth has 16 forward gears, 8 reverse gears, and a top speed of 20 mph. Even with its massive 6ft tall tires, the 12ft tall articulating body allows the K700 to have a tiny (claimed) turning radius of 23 feet. In its day, the all-terrain Kirovets K-700 was used for many jobs. Including farming tasks like plowing fields, disking, cultivation, harrowing, seeding, and snow plowing / management. The sturdy 4×4 K700 tractor was also a popular tool in other fields too. Including road construction, reclamation, general construction, and excavation. We don’t know what the Kirovets K-700 in this video was being used for. But we do know its driver practically turned it into a submarine.
Watch Video

In order to stay running in deep water, a diesel engine has to have a steady supply of air, and it has to be able to expel exhaust. Apparently the air intake on a Kirov K-700 is mounted very high in the engine compartment, and the exhaust stack sits right in front of the windshield. So the driver pegged the Go-Pedal to the floor, and the low gears in the K700 4×4 axles kept the wheels turning. It took a while, but this mighty Russian tractor was finally able to find enough traction to drag itself onto dry ground. And it came out of the water with a goose-neck trailer attached to it!

If you want to see how flexible the driveline and articulating body of the Kirovets K700 really is, checkout this short bonus video. You can almost picture the yellow Kirovec K700 in the first video, contorting itself like this, as it crawled it’s way through that river…while pulling a trailer.

Fording a river is a difficult task for any non-boat, and the formidable Kirovets K-700 proved that it’s capable of surviving even the stupidest driver. But we certainly hope that vodka was involved. Because if he’s that dumb sober…

Okay, wait. In reality, the epic “error in judgment” that resulted in this viral video hit, was actually part of a demonstration, put on for the 2008 Russian Field Day. This exhibition was organized by the JSC Petersburg Tractor Factory, and held on the grounds of the Borisovo Grain Company, outside of Belgorod, Russia. The company was launching its new line of Kirovets K-9000 tractors, and what better way to get the attention of prospective buyers/dealers, than to dunk one of your most iconic models (the K700 is as recognizable in Russia, as a green John Deere is in the United States) into a river, and watch it drive right out. Needless to say, the Kirovec K9000 launch was a success, and the K-700 tractor drives through Russian river video has so far garnered over 17 million views.

Driver Of Submerged Tractor Refuses To Give Up