In the South Tyrol Museum of Archaeology in northern Italy, a roughly sewn scrap of deer, bear skin and lime tree bark takes pride of place in the museum’s prized collection of Stone Age artifacts. Dating all the way back to 3,500BC, this curious assemblage of materials was worn by an unfortunate native – ‘Ötzi’ – whose body was discovered entombed in a glacier in 1991. It is believed to be our planet’s earliest ‘mountaineering boot’ – when Ötzi and other neolithic inhabitants of South Tyrol ventured up into what we now call the Alps, these rudimentary appurtenances were the go-to choice of footwear. 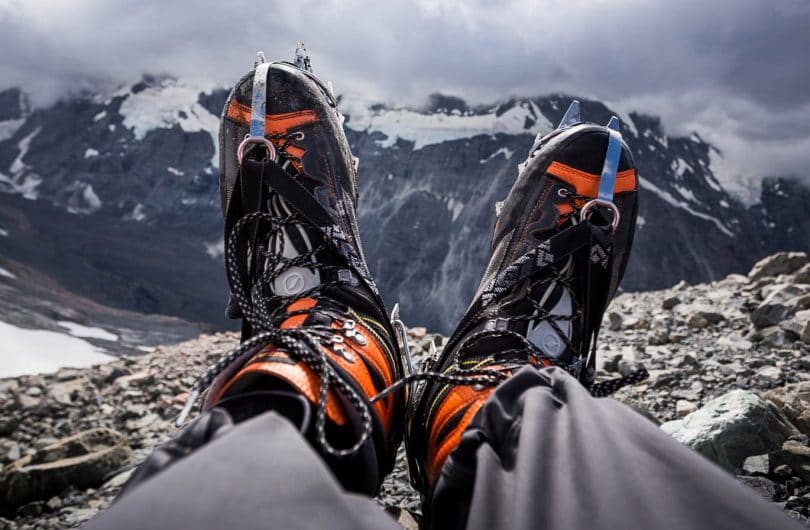 Ever since, mountaineering boots have undergone quite a transformation since the days of Ötzi and now here at the turn of the 19th century, brands such as La Sportiva are turning out custom-made mountain-going footwear designed specifically for you. These days, dozens of manufacturers combine the best of their materials, expertise and innovative technologies in a bid to ensure optimal performance in high places for all types of mountaineering pursuits. Nevertheless, in one respect we might envy Ötzi and other early mountain-goers – while their options were severely limited, we now have an overwhelmingly vast array of boots to choose from and finding the right one can be a challenge in itself. In order to help you find the perfect mountaineering boot, let’s first take a look at the most important factors to consider before making that purchase.

A boot ‘B-rating’ classifies a boot’s features and crampon compatibility, essentially providing a short-hand description of where and when it is most suitable for intended use. B1 boots are generally lighter, 3-season boots with strap-on crampon compatibility. A B2 rating makes a boot, 3/4-season with semi- or fully-automatic crampon compatibility and increased insulation. B3s are high-altitude, extremely heavy duty boots designed for the coldest climates, winter climbing and ascents undertaken in the world’s highest ranges.

If you’re unlikely to be using crampons (or only strap-on crampons) and don’t mind being a tad short on ankle support or having a bit of flex in the sole, a lightweight B1 will do the trick. More of a hiking boot than a mountaineering boot, B1s are suitable for low-grade scrambling but usually lack the insulation and stiffness of most B2 boots , which may be required for use above the snow-line or on true alpine ascents with edging, hard snow or ice, or if the route involves any graded climbing or scrambling.

A good, all-round, one-boot-does-it-all option for mountaineers heading into higher ground. While B2s vary in terms of ideal use or application, they generally offer a rigid sole, toe-articulation for scrambling, extra insulation and articulated crampon compatibility (either fully-automatic step-ins or hybrid semi-automatics). A good option for those who want one boot to use year-round on different terrain, though some lighter, less well-insulated models are unlikely to provide enough warmth for peaks over 6,000. That said, some B2 boots, such as the La Sportiva Nepal, offer a thick, insulated double- tongue that might make them warm enough for summer climbs on some peaks in the 6,000m-7,000m range and lower winter climbs. Ideal for alpine snow, ice, rock or mixed ascents.

For those of you liable to be spending a lot of time winter mountaineering or taking on high-altitude, technical ascents, a B3 boot is likely to be your best option. B3s provide an ultra-stiff sole, extra insulation (usually in the form of a detachable inner boot ‘sock’) and compatibility with fully-automatic (step-in) crampons. Many B3s also feature a hard, plastic outer shell for increased protection from the elements. If you’re heading to the Himalayas, Denali, the Cordillera Blanca or the Alps in Winter, the boot you need will almost certainly fall into this category. 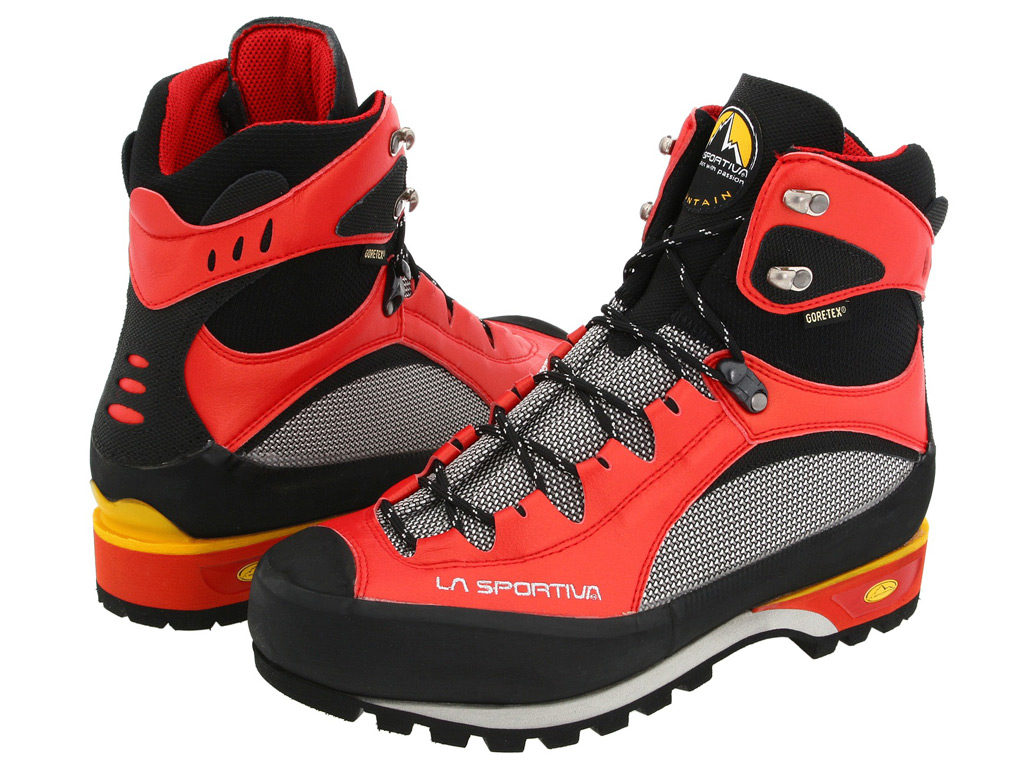 Single layered boots are most commonly general mountaineering boots with either semi- or fully-automatic crampon compatibility and lack the insulation required for high altitude or winter climbs. Ideal for Canada, and the lower 48. 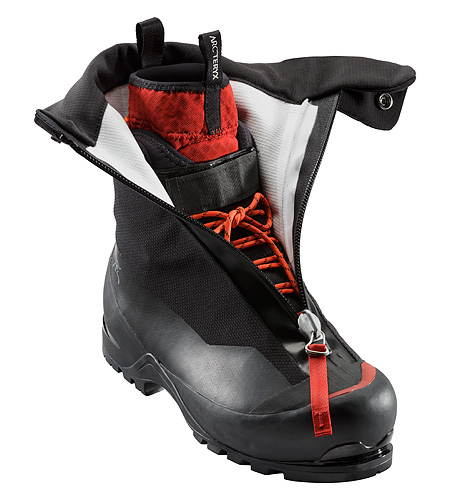 Double layered boots vary in terms of the insulation they provide, but at the high end of the scale cover boots suitable for summiting Everest and at the low end more lightweight models appropriate for general winter mountaineering and high alpine summer ascents. 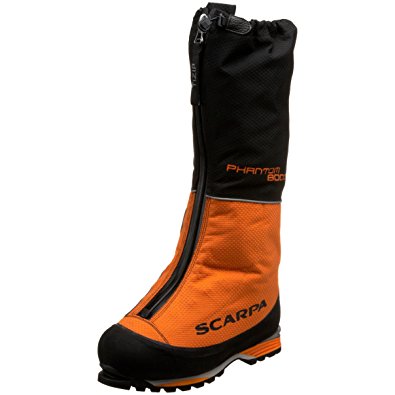 As with double layered boots, gaiter boots cover a wide range of uses but the attached ‘gaiter’ generally means they provide far more warmth than single boots and either equal or superior insulation to most double boots. Most models are intended for high-altitude and/or winter ascents.

While seeming like a no-brainer, not all boots (or feet!), sadly, are created equal. Although this problem is easily avoided by trying them on before buying, if purchasing online be sure to read the user reviews and specs prior to heading to checkout. Some boots – like Scarpa, for example – are notorious for being a bit tight around the toe-box and a size 10 from one manufacturer might not equate width and length-wise to a size 10 from another. Other brands tend to produce either higher or lower arches than their competitors as standard – make sure you do your research before buying.

A long day on the mountain can take its toll on your legs, all the more so if you’ve attached to the bottom of them something far heavier than is necessary for the climb at hand. While we wouldn’t recommend skimping on weight at the expense of much-needed insulation, there’s no point wearing a pair of boots far heavier than your climb demands. The trade-off between weight and performance, like every other factor we need to consider before buying mountaineering boots, depends entirely on our requirements and anticipated use. Knowing where and when you are likely to use the boots will allow you to judge just how heavy you need to go.

What Type of Terrain Will You Encounter?

If your mountaineering pursuits cover a wide variety of routes, at different altitudes and in different seasons, the chances are you will need more than one pair of boots. Below is a list of possible uses and the best boots for each occasion.

Before buying boots for high altitude climbs three questions must be answered: How high? How cold? How technical? For those heading over 7,000m in any season, a double-boot or a gaiter boots with automatic crampon compatibility (B3) and some form of outer shell is a must. With frostbite a serious concern, most B2 boots simply won’t provide enough insulation to keep your feet safe.

Depending on the season and the whereabouts of the climb, ice or mixed routes could be confronted with as little as a three-season B2 boot or as much as a heavy, plastic-shelled, B3 double boot or gaiter-styled boot.

For 3-season, rock and occasional ice or snow climbs, a strong B1 or B2 boot is likely to be as much as you will require. While a B1 boot will not offer compatibility with semi- or fully-automatic crampons, for those who anticipate spending most of their time in the mountains on rock, with only occasional ventures onto ice, the lighter B1 boot should meet your requirements, provided you aren’t climbing in the middle of winter. Tackling graded routes or those featuring stretches of ice and snow, only a stiffer B2 boot will serve your purposes adequately.

We have indeed come a long way since the days of Ötzi and the early models of mountaineering footwear initially conceived by the northern Italians. We can only imagine how the trailblazers of adventure in high places might have got on if they’d had the above range of mountaineering boots at their disposal…and be very grateful for having them at ours!