How-To Zipline Your Car Across a River

So what do you do when you’ve got a river running through a deep gorge, and no bridge in sight? If you were normal, you would probably drive up and down the river until you find a bridge, or at least a shallow crossing you might be able to fjord. You would probably also have a large four-wheel drive vehicle that can handle some nasty terrain. Well just in case you’ve found yourself in the rare situation where you are forced to either leave or find a way to tow your vehicle across a raging river, we’ve got you covered as it’s been done before too. If you’ve watched enough viral videos, there’s one thing you’ve probably noticed about Russians and their predicaments: normal rules do not apply. Usually the predicaments are a bit crazier than what most people face – in this case, it’s not a lazy river, but some fast-moving rapids. And of course, their off-road vehicle of choice is not a rough-and-tumble four-wheel drive. Instead it’s a hatchback that looks better suited for urban environments. 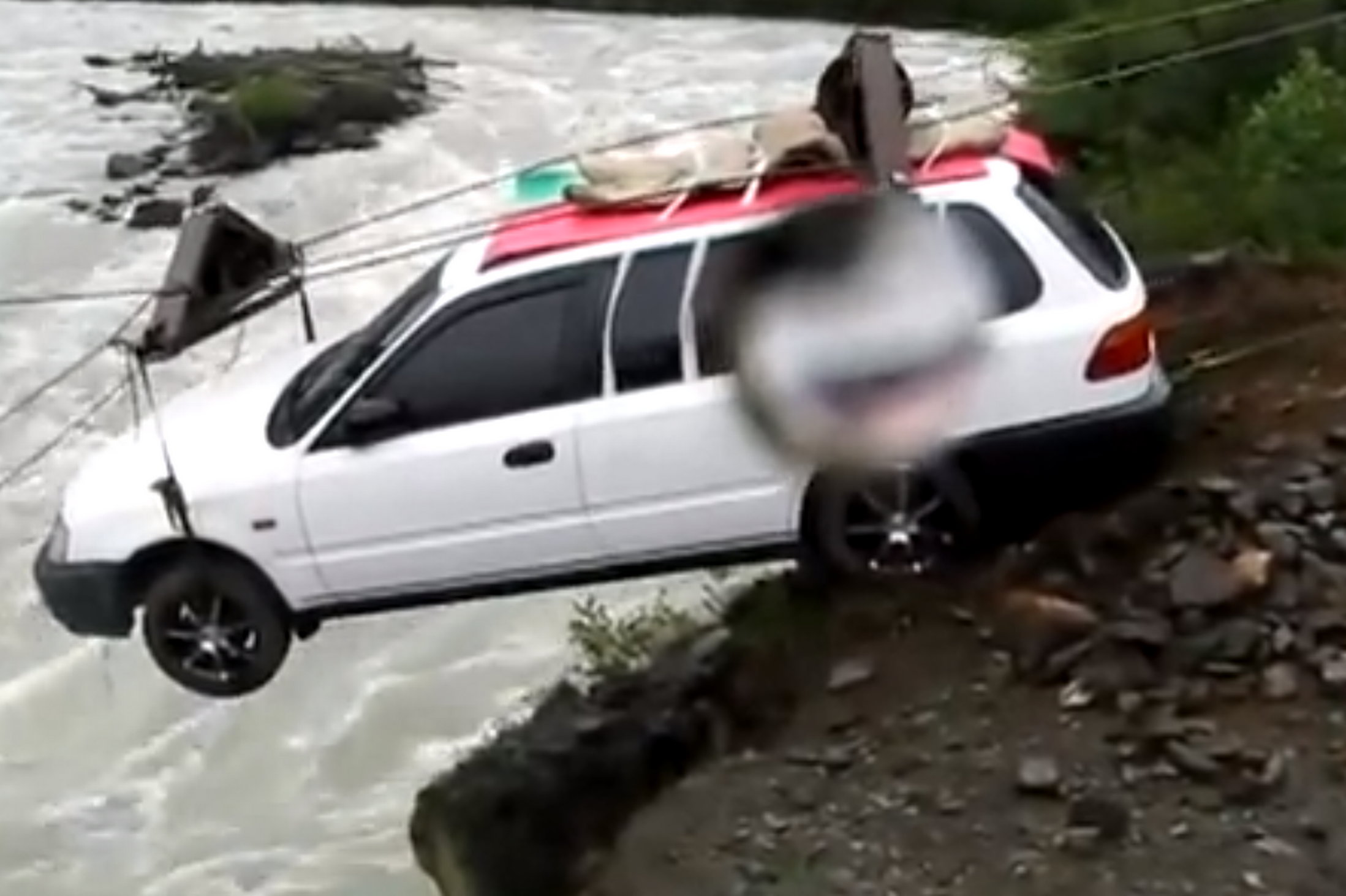 So of course, the Russians won’t have the normal reaction. No, instead of trying to find the easy way around, they decide to try and send the car across on a zip line. As you can see in the video, they use high-strength steel cable that stretches across the gorge. The steel cables are threaded through a pair of steel triangle frames to distribute the weight evenly across them. The car is then attached to the steel frames using ratcheting straps that cross underneath the body, or around the axles. You can see early on that the guys aren’t too sure how well this is going to work; the car is eased along slowly at first, almost gingerly. Once they seem fairly sure that the cables aren’t going to break or pull up their anchors, they start to give the car a little more slack, and soon it begins to slide effortlessly down the zip line. They even get it to come to a slow, graceful halt at the end of the line – not too rough of a ride at all.

Maybe it’s a good thing they didn’t have a serious off-road vehicle along for this trip. Can you imagine trying to send a Jeep Wrangler or a Land Rover? Looking at the little hatchback, it doesn’t seem to be too solidly put together and is likely made of cheaper, lightweight materials – as many Russian vehicles are. This also means it weighs in at roughly one-third the weight of a Land Rover.

from the web
Is this an idea that will catch on? Doubtful. One problem and you could lose your entire car, along with everything that’s in it. It’s a very high risk to take, and one that likely isn’t covered by your insurance company. Not to mention, the tension on the steel cables is so strong that, should one snap and whip back towards people, it could cause some serious damage or even a fatality.
Watch Video
In the end, this does beg the question: How are they getting that car back across?

How-To Zipline Your Car Across a River