In a world where our leaders appear to be getting progressively more unconscientious, it is a source of great comfort to know that not all our planet’s major players are cut from the same cloth. In the high echelons of the planet’s multinationals and positions of power, thankfully, there remain a few moral and ethical exemplars to whom we can still look up to for both inspiration and hope. 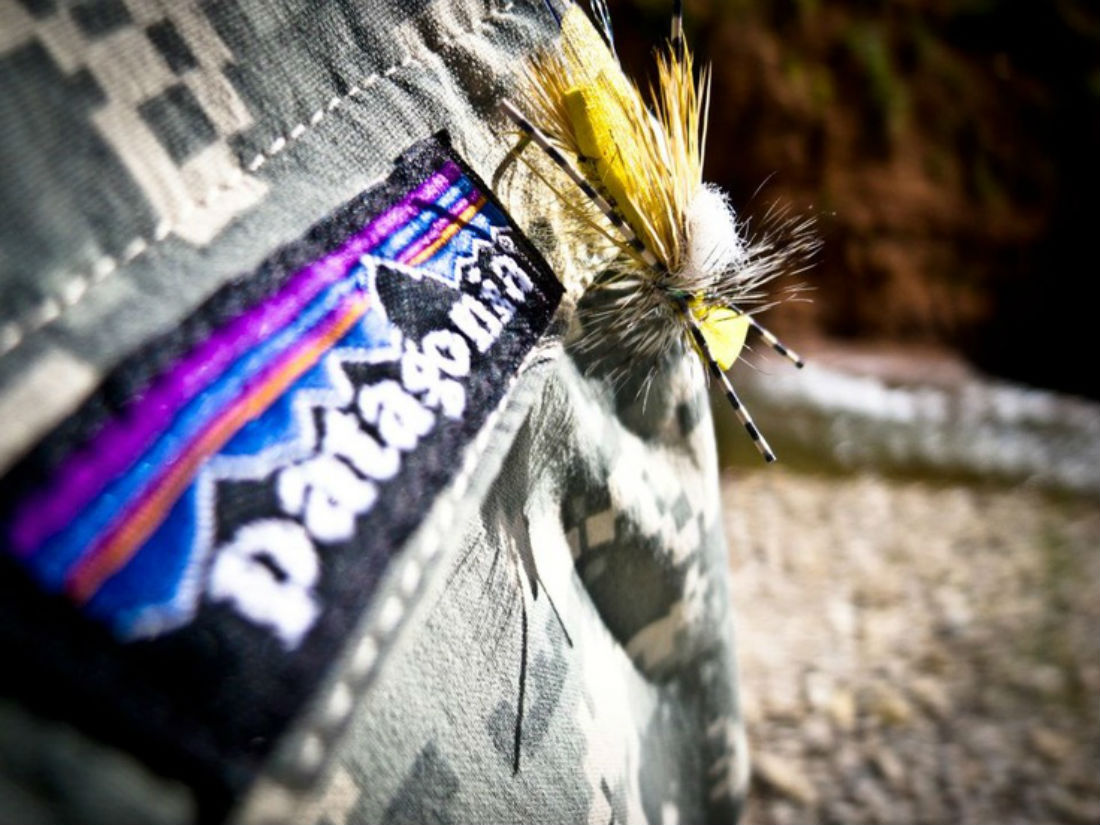 No leader symbolizes these exceptions to the rule quite like Yvon Chouinard, the visionary, idealist co-founder and owner of outdoor brand Patagonia. Within the outdoor community, Chouinard has risen from cult hero to nigh on demigod on account of his numerous ‘profit for good’ policies, environmental activism and unflinchingly lived-by philosophy. But just how did this former dirt-bag climber become the rock star of the entrepreneurial elite?

Patagonia’s co-founder began blazing trails at a very young age. While others of his generation were off getting degrees, nine-to-fives and slipping into the mold, Chouinard was treading another, more adventurous path, putting up first ascents on Yosemite’s North American Wall, travelling the world and living the ‘dirt bag’ life long before the term had gained popularity. Then, almost involuntarily, he took his first step towards becoming the figurehead we know today. Unimpressed with the sheer volume of iron pitons left in ‘big wall’ climbing routes, Chouinard decided to make his own, reusable pitons and high quality carabiners – gear that would both last and cause minimal impact to the natural environment. It was the first materialization of the philosophy that has been at the heart of his business for almost half a century. 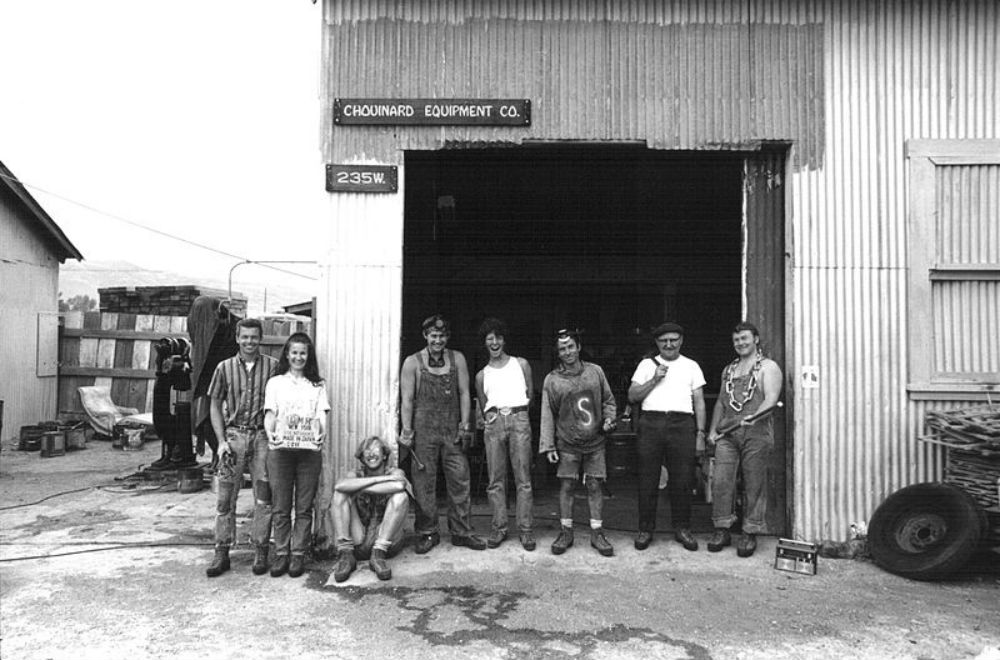 Shortly thereafter, in 1970, Chouinard made an all-important discovery while on a climbing trip to Scotland. He bought a rugby shirt with a tough collar which prevented his gear sling digging into his neck during climbs and didn’t fall apart under a bit of rough treatment. Chouinard and his friends were so impressed with the shirt that he bought a shipment from producers Umbro and sold out almost immediately. Chouinard then continued adding other ‘soft’ items to the Chouinard Equipment catalogue until the point where the soft gear sales merited an entirely different company. And so Patagonia was born…

The Evolution of Patagonia: From Eco-Conscious Clothing Brand to Environmental Exemplar Par Excellence

Chouinard eventually phased out his piton sales, advising climbers in his company catalogue to use the chocks (nuts) popular with British climbers in order to reduce damage on climbing walls – and this at a time when piton sales accounted for 70% of his business. It was Chouinard’s first step to becoming an environmental warrior in earnest – an act of self-sacrifice that few other business owners or magnates could ever contemplate, let alone go through with. In a similar move, when an environmental audit in 1994 revealed their most damaging textile to be intensively farmed cotton, Patagonia committed to using 100% organic cotton from then on. It was another bold move and statement of purpose, one that threatened to price them out of the market. It was also symbolic of their leader’s no-bullshit, no half-measure M.O. Patagonia, Chouinard declared, would be “leading by example, not just talking about what we’re doing.” And he has lived by his word…


In the 1980s, Patagonia began broadening the scope of their altruism and environmental work beyond their own production lines. Disturbed by increasing development in natural areas and increasing reports on the poorly state of the planet, Chouinard & Co. started donating 1% of sales to environmental causes, focussing their attention on grassroots environmental groups seeking to protect habitats, wilderness and biodiversity – a policy that continues to this day. Some examples of the campaigns Patagonia have supported include those fighting against high-emission traffic in the European Alps, commercial development in Yosemite and genetically modified food sources. To date, they have lent support to over 1,000 such causes. 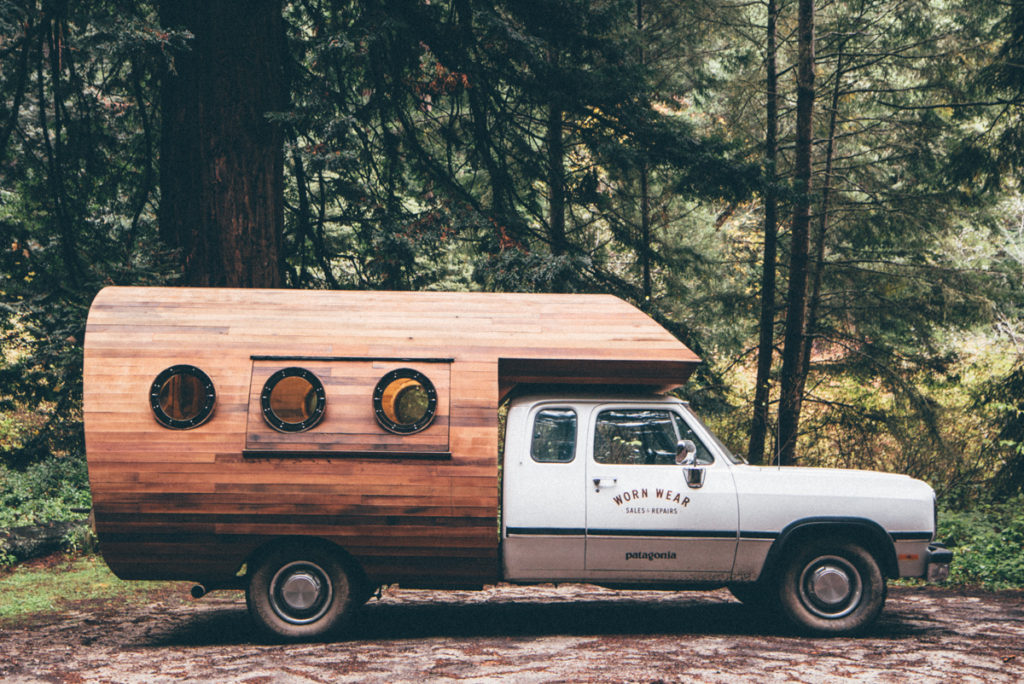 Perhaps the greatest, most counter intuitive and game-changing undertaking Patagonia have embarked on to date, however, came with the introduction in 2013 of their revolutionary ‘Worn Wear’ scheme. From the outset, Patagonia strove to produce quality gear items that reduced waste and reckless consumerism. Longevity was the key. Even in the liberal 1970s, making clothing non-perishable was a fairly radical move, one that was both financially bold and ran counter to popular manufacturing trends, where products were becoming more ‘throwaway’ by the year. The Worn Wear scheme took the call to conscious consumerism to a whole other level. This initiative encourages customers to send their old, unused garments to other outdoor-goers and also contains a promise from the company to repair or replace old products – all in a bid to reduce the overall production footprint and encourage thoughtful consumption. At present, Patagonia have a Worn Wear van that travels around North America offering free clothing repairs, even for items not made by Patagonia. More recently the brand has sought to extend the policy overseas and has started a 50-stop, 5-country European tour to carry on the good work across the Atlantic.

Shifting Paradigms and Blazing Trails: How Patagonia Are Making Environmental Ethics A Mission Statement ‘Must’

“At first we were all interested in making the best products—that’s the first part of our mission statement,” said Yvon Chouinard in an interview with The Usual. “And then as we got concerned about the state of the planet, we added on “cause no unnecessary harm.” And as we got more depressed or concerned about the world we added on a third part, which is influencing other companies to use our business to inspire and implement solutions to the environmental crisis.”

Not content with making huge charitable donations and reducing their own environmental footprint, since the turn of the century Patagonia have sought to exert influence over other industry giants and have paved the way, both directly and indirectly, for something of a paradigm shift in the way many of their peers do business. 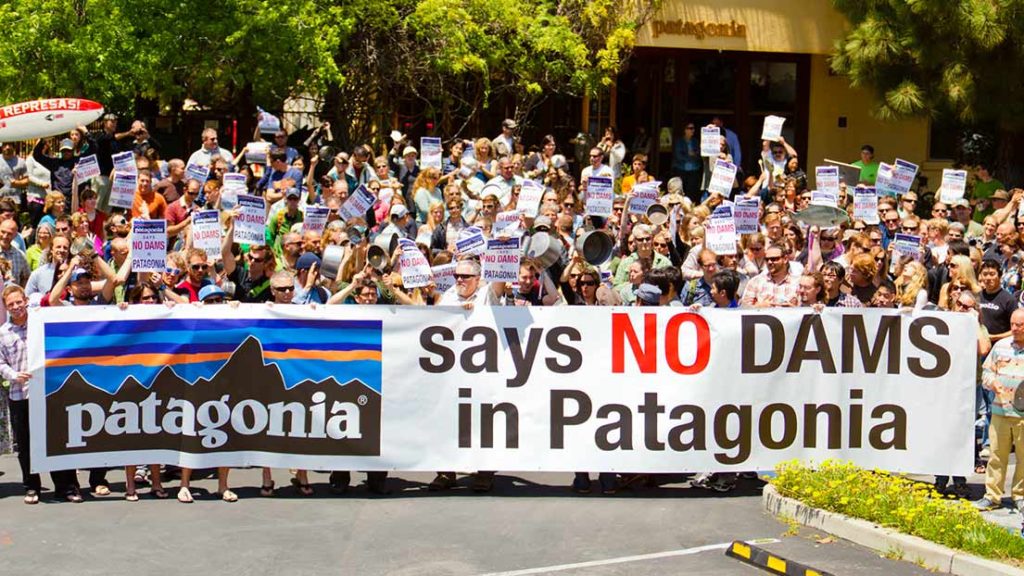 Since committing to using 100% organic cotton back in 1996, other clothing heavyweights such as Gap and Nike have followed suit and Patagonia’s decision to use 100% recycled paper in their offices back in the ‘80s is now common practice for any remotely eco-conscious business. Patagonia has also been a key player in the creation of the Sustainable Apparel Coalition, a consortium which includes huge retailers such as Walmart, Macy’s and Gap and which aims to devise a system giving a sustainability grade to every purchasable product. Without such a big-name player leading the way, it’s unlikely so many others would have gotten round to making these changes for the better quite so quickly, if ever. Patagonia’s inspirational influence hasn’t stopped with the big brands, either. More recently, a number of smaller indie brands – Finisterre, Cotopaxi, Alpkit and Paramo, for example – have all subscribed to the sustainability and “no unnecessary harm” ethos and modelled their businesses on Patagonia’s ground-breaking blueprint. The long-term trend of taking without giving back, it seems, has been irrevocably bucked. Let’s hope it’s a sign of things to come…

Perhaps the most impressive of all Patagonia’s achievement’s to date has been in turning their ‘1 Percent for the Planet Scheme’ into an international, cross-industry venture. Since formalized in 2001, Chouinard’s brain child has evolved from a one-man show into a global network of over 1,500 member businesses. Together, they have amassed $175million for environmental causes and now include participants as diverse a Cliff Bar and New Belgium Brewing. To date, Patagonia has donated $22m of turnover to 1,035 groups through the scheme. In 2016, they decided to take things a step further, pledging to donate 100% of Black Friday sales in North America to the scheme’s recipients. Whereas they had expected $2 million, Patagonia was overwhelmed with support and Black Friday sales donations quickly grew to more than $10 million – all of which was donated to grassroots organizations supporting the environment.

Taking the Fight a Step Further: Environmental Activism on the National Stage

The ‘step further’ has become integral to Patagonia’s mission. It should have come as no surprise, then, that soon they would be extending the scope of their environmental activism and exerting their influence in the political arena, too. The most notable example of this new string to the Patagonia bow came with their involvement in the 2017 Bears Ears National Monument controversy. 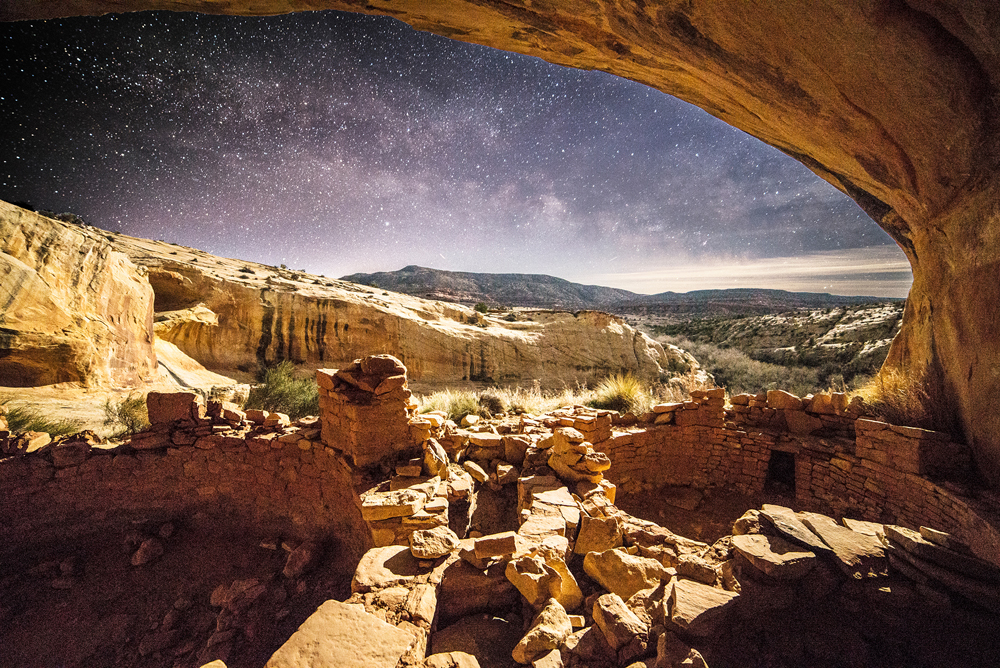 In 2017, President Trump signed an executive order threatening 21 years of national monument designations, including the protection of Bears Ears in Southern Utah. Home to 5 indigenous tribes and a popular historical, hiking and climbing and area, Bears Ears was granted National Monument status in late 2016, a huge victory for the Obama administration, environmental campaigners and the area’s indigenous peoples against the corporations who had earmarked the 1.3-million-acre territory for oil and gas drilling. The victory was short-lived, with the Utah legislature passing a resolution asking president Trump to rescind the National Monument designation. The campaigners and indigenous peoples would do what they could, but without the backing of heavyweight lobby or interest group to put pressure on the powers that be, their battle was looking increasingly uphill.

On February 7 of 2017, Patagonia announced that it would not be attending the Outdoor Retailer Market in Salt Lake City later that year or in subsequent years due to the Utah government’s opposition to Bears Ears. Patagonia urged other retailers to join it in relocating their business to other states that actually “value our industry and promote public land conservation”. Shortly thereafter, Outdoor Retailer Market announced its decision to take its annual trade show elsewhere, taking with it the $45million and 50,000 visitors per year it had brought to the state of Utah over the event’s 20-year history.
The Bears Ears controversy is just one among hundreds of causes to which Patagonia has leant its weight and funding over the years. We can only imagine how the world might look if other corporate heavyweights take note and begin to follow suit. Let’s hope they do… 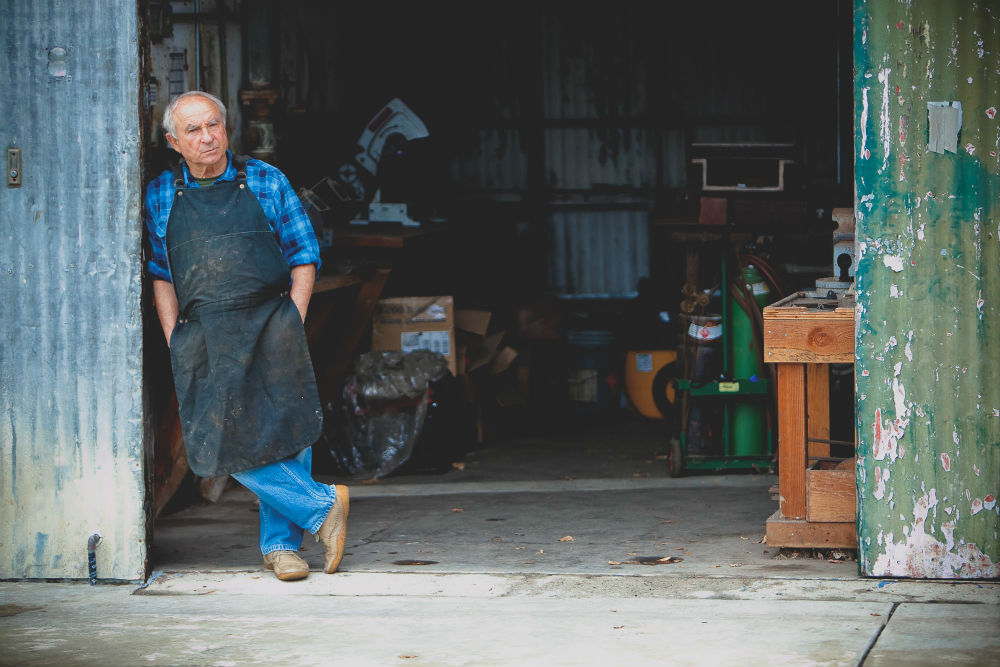