Warning: getting the following product could take away all of your excuses to not go to work during a really bad snowstorm. Four-wheel drive vehicles are great since they promise the perceived ability to get virtually anywhere. The truth of the matter is that not every truck or SUV with four-wheel drive can conquer every obstacle out there. This is especially true of particularly deep snow, trapping even the most capable vehicles and rendering them almost useless in some situations. Let’s face it, tires have their limits. 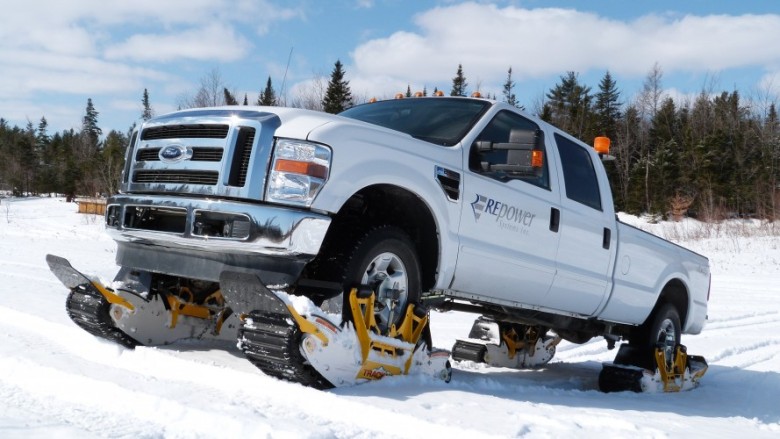 Track N Go: Turn Your Truck into a Snowmobile with the The First Wheel Driven Track System TheOffroader 2016-01-28

That’s where the Track N’ Go vehicle track system comes in. It converts any four-wheel drive vehicle into a type of snowcat, but without making messy modifications. Despite the lack of innovation in offroad technologies, the Track n’ Go track system offers a unique approach to offroaders worldwide looking to take on the heavy snow. Other track systems involve removing the wheels and other components from the vehicle, then attaching the tracks, which can be complex and take a significant amount of time to install. With the Track N’ Go, the truck or SUV is driven up onto the treads, keeping the wheels and tires in place. Once they are locked on, the treads are ready to pilot the vehicle through the snow safely. If necessary, the Track N’ Go system can work on dry roads without suffering damage, as long as the vehicle doesn’t travel faster than 37 mph.


Anyone who has driven or even ridden in a snowcat knows that the vehicle doesn’t just power through deep snow. Instead, the tracks work to spread the weight of the machine out over a larger distance, which is exactly what snowshoes do for humans. As a result, the vehicle rides on top of the snow. The Track N’ Go system does the same thing, even with a heavy model like a Hummer H2 or Ford F-350. It comes with plates mounted to the front and rear of the tracks, which keep the vehicle from diving into deep snow and even assists with overcoming obstacles. The tracks come in a set of four and include two ramps. The driver sets up two of the tracks and uses the ramps to drive up onto the contraptions. A set of rubber rollers clamp the tire into place without damaging it.

from the web
The installation process takes less than 15 minutes, which might be shorter than at least one of Kim Kardashian’s marriages. When each tire turns, it moves geared rollers that are texturized. Through a series of gears, the rollers turn the rubber belts at a one-to-one ratio. A good amount of control of the vehicle is left, the tracks accommodating the front wheels so they can turn up to 30 degrees. The symmetrical configuration of the system also means that when the vehicle travels in reverse, it behaves the same way as it does when going forward. Other track systems don’t necessarily provide that same level of predictability.
Watch Video
Anyone who goes off-roading even some of the time knows that damage from rubbing can happen to wheels, body panels, etc. The Track N’ Go was designed with closed sides to avoid that. The design also prevents the vehicle from sliding sideways on the snow, and even cuts down on how much snow is thrown up in the air so that the driver can see in front and behind the vehicle easily. 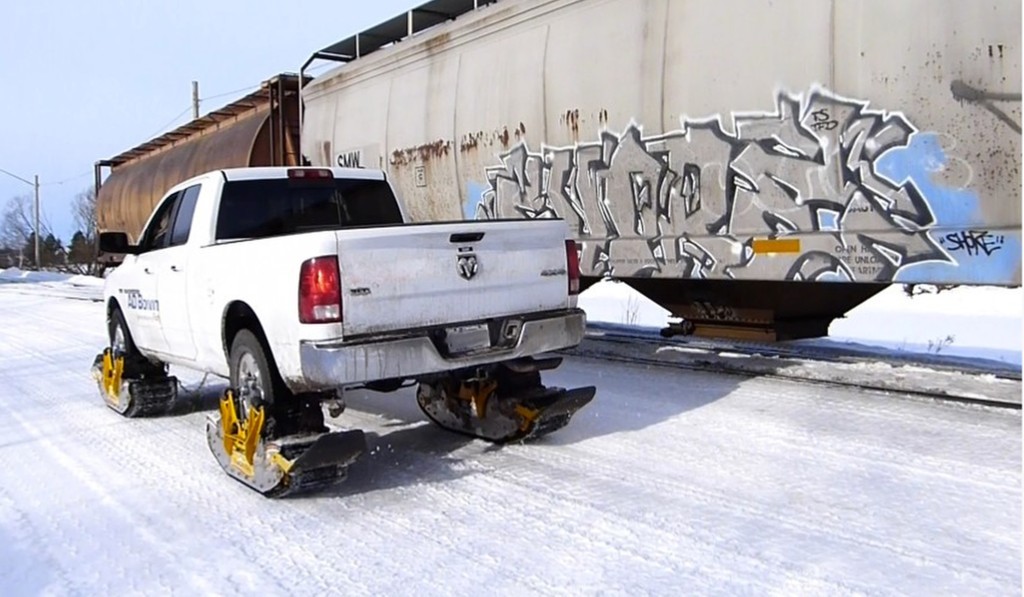 At $25,000, the Track N’ Go might seem expensive to some. If those same people priced out what a good snowcat or tank costs new, they would quickly change their mind. The system also means that vehicle owners can enjoy the heated seats, satellite radio, and all of the other nice features in their beloved vehicle while still safely traveling through areas that otherwise would be impassable.